Jean-François Leroy is the Director General of the oldest international festival of photojournalism, and is widely known for his affirmative stance on the relevance of photojournalism. Earlier this year, he wrote an editorial featured on the Visa pour l’Image 2014 website, defending the rights of photographers to be adequately compensated.

It is true, that in today’s world, it is hard for even the most methodical photographer to keep an updated archive – why? Because there is simply no time. Instead, time is being spent on trying to make ends meet, or attempting to produce relevant and time worthy stories.

“If there are no more photographs produced today, what will there be for the archives of the future?” Leroy asks.

Jean-François Leroy is a long time friend of both Jean-Pierre and Eliane Laffont. It will be at the 2014 Visa pour l’Image, amongst friends, mentors and photography enthusiasts, that Photographer’s Paradise: Turbulent America 1960-1990, Glitterati Inc., will be unveiled.

Photographer’s Paradise draws on Jean-Pierre Laffont’s extensive archive. Without this archive it would have been impossible to curate a book that documents the defining years of 20th century America. 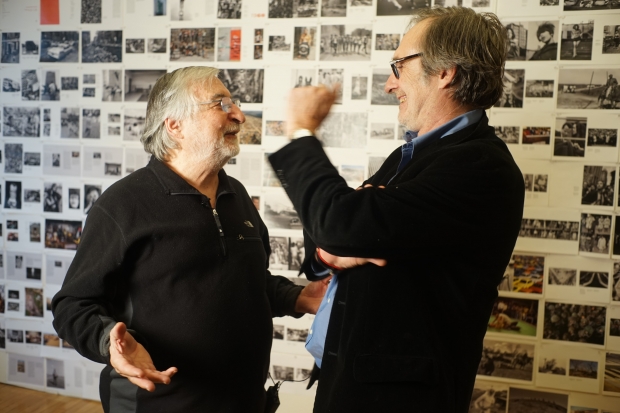 Manhattan, New York. April 4, 2014. Jean-Pierre Laffont is interviewed by Jean-François Leroy about his upcoming book “Photographer’s Paradise: Turbulent America 1960-1990”, in front of the book wall at the Laffont studio. This interview will be shown at Visa pour l’Image at Perpginan, France on Thursday, the 4th of September. Photograph by Benjamin Petit